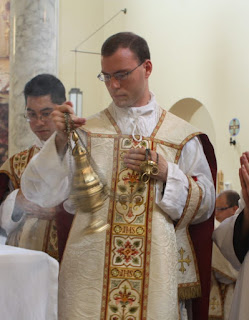 The Traditional Knights Latin Mass Network would like to highlight a holy Latin Mass priest, who joined our Network briefly but left this world too soon. Several councils now bare his name.

Fr. Kenneth Walker FSSP (+), a native of New York, was ordained to the priesthood in 2012. Growing up, Fr. Walker developed a devotion to the Traditional Latin Mass, and after graduating college in Canada, attended Our Lady of Guadalupe Seminary in Denton, Nebraska, operated by the Priestly Fraternity of St. Peter (FSSP). The FSSP is a society of priests dedicated to offering the Traditional Latin Mass and minister to the Latin Mass faithful in many dioceses through the world.  While at Seminary, Fr. Walker also became a Knight of Columbus.

As a member of the Priestly Fraternity of St. Peter (FSSP), Fr. Walker offered the Traditional Latin Mass exclusively and was assigned as parochial vicar to Mater Misericordiæ Mission, the Latin Mass parish in Phoenix, Arizona, staffed by FSSP priests.

One of his tasks at Mater Misericordiæ Mission was to assist the newly formed Knights of Columbus Council Mater Misericordiæ Council (15576).  Fr. Walker was appointed their chaplain, attended most of their meetings and provided the Council will excellent counsel.

Fr. Walker also reached out to the Traditional Knights Latin Mass Network and joined our winter 2013 teleconference meeting to connect with other Latin Mass Knights and solicit ideas in developing the new council.  Overall his efforts helped the council to grow in the early years of its formation.

Sadly, Fr. Walker’s life was cut short on June 11, 2014 when he was murdered by an intruder who broke into the rectory.  He received last rites from his pastor (who severely injured in the attack).  Fr. Walker is now buried at Our Lady of Guadalupe Seminary in Denton, Nebraska.

Despite this tragedy, Fr. Walker’s virtue and innocence has only grown and now several Knights of Columbus Councils based at FSSP parishes hear his name:


We conclude with his words from his seminary application which was read at his funeral:

God, in His infinite love, desires all men to be saved and so achieve their true end. Along with the Church, then, I am deeply grieved by these errors concerning the nature and dignity of man accepted by so many people in the world, which deviate them from their supernatural end. In full view of the situation in the world, then, the only vocation that I could be satisfied with, as a work, would be one that would be dedicated to bringing people to salvation in whatever way God wills for me to do so.

Please offer prayers for the repose of Fr. Kenneth Walker’s soul and the conversion of his attacker.