Help support a great project that promotes the Traditional Mass

As you know, we’re supporting the groundbreaking Sacred Liturgy documentary, produced by a Sacred Stories, a Catholic film group owned by Cameron O’Hearn, an FSSP/Latin Mass parishioner in Dayton, Ohio. The documentary can help win back Catholics to the traditional liturgy.  Sacred Stories need $23,000 to launch a kick-starter campaign for the film this winter.

During Lent, we are asking Councils (and/or their members) discuss collectively donating up to $500 total for this film (or whatever your council can donate). This can be done through a mix of pancake breakfast proceeds and/or individual council member contributions.

Can you bring up this matter at your March council meetings?
Why is this important? If we want to see tradition restored to the Church, and to the lay apostolates like the Knights, we have to help (with God’s grace) win back our friends, family, and brother Knights back to the Sacred Liturgy, to the Traditional Latin Mass.

This documentary is a great practical way Councils and Knights can help achieve that goal.
By Latin Mass Knights at 2/26/2020 12:14:00 AM

On Saturday, 15 February 2020, Cardinal Zen offered the Votive Mass of St. Pius V at the Church of St. Vincent Ferrer in New York City.  A member of Woodlawn Council 2161 was present, and provided the following report & photos. 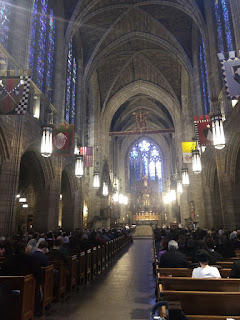 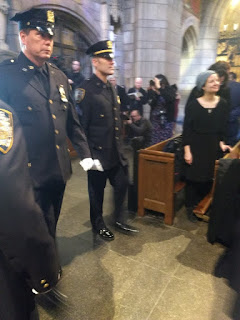 There were at least 700 people in attendance at the Pontifical High Mass at the Throne at the Church of Saint Vincent Ferrer, New York City, celebrated by His Eminence Joseph Cardinal Zen, of the Diocese of Hong Kong. His Eminence was greeted at the West Porch of the church by the Honor Guard, made up of NYPD officers, and processed to the high altar amid solemn music by the Schola Cantorum and Brass Ensemble of St. Vincent Ferrer. 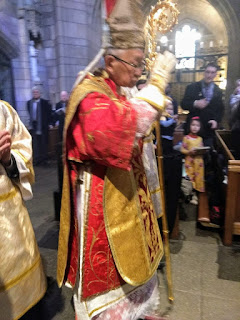 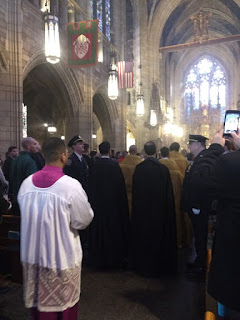 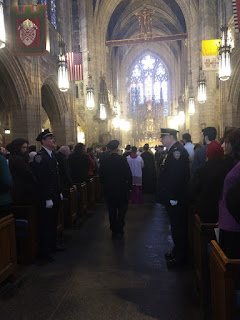 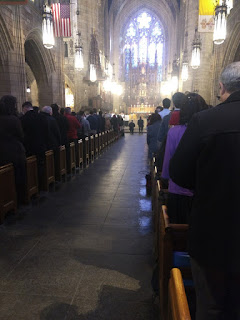 The Reverends Robert Pasley of Camden, Michael Novajosky of Bridgeport, Rufus Kenny of New York, and Richard G. Cipolla, DPhil, of Bridgeport served as assisting priest, deacon, subdeacon, and homilist, respectively. The Mass was part of the Third Annual Lepanto Conference, an event organized by the Pio-Leonine Society for young Catholics under the patronage of Pope St. Pius V, and was sponsored by the Society of St. Hugh of Cluny. 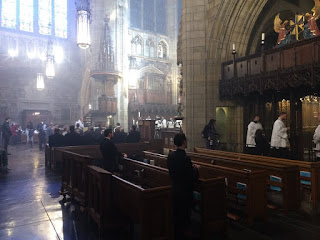 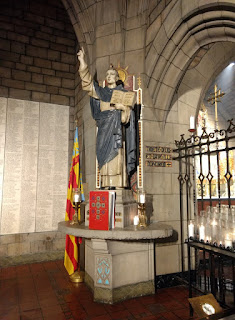 The Reverend Richard G. Cipolla, DPhil, of the Diocese of Bridgeport, opened his homily with lines from G.K. Chesterton’s Lepanto Poem, and went on to point out how the poem was not much read today. In fact, it was not much read because our postmodern society rejects such celebrations of chivalry, courage, and Christendom in Europe as offensive in this post-Christian age centered on the desires of the self and with distorted view of reality. He ended the homily by saying that too many Catholics believe the Crucifix is simply furniture of the Church. When Jesus Christ is no longer the center to how one lives, the Faith becomes mere religion. When Cardinal Zen, whose witness to Jesus Christ refuses to deny the freedom bought on the Cross, celebrates Mass at the altar it is not mere religion, it is an eruption of Heaven at this space and time. It is the Mass of Saint Dominic and Saint Benedict. The Church, grounded in regality, is the glorious embodiment of the Faith. Saint Pius V, pray for us. 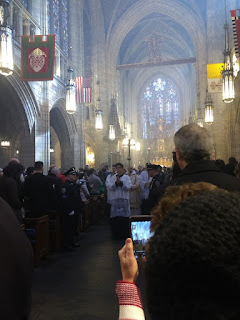 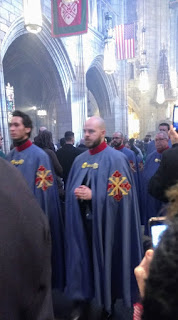 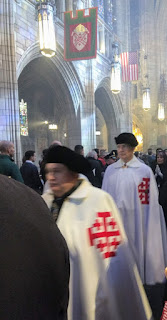 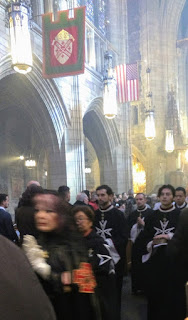 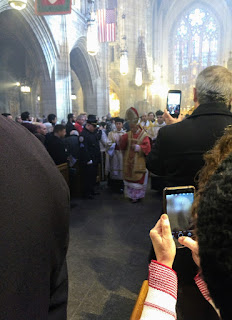 Additional information and photos, including the text of Fr. Cipolla's sermon, can be found on The Society of St. Hugh Cluny website. 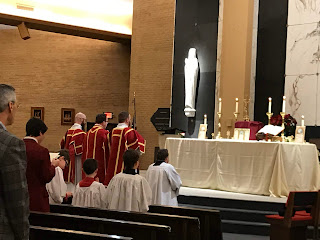 Matthew Hoffman, Grand Knight of South Hills Council 3084, welcomed the faithful before Mass.  Canon William Avis of the Institute of Christ the King Sovereign Priest, and Pastor of Most Precious Blood of Jesus Parish in Pittsburgh, offered the Solemn Mass, assisted by Fr. Samuel Spiering as deacon, and Fr. Ryan Erlenbush as subdeacon.  Fr. Frederick Gruber heard confessions before & during Mass, and assisted with the distribution of Holy Communion. 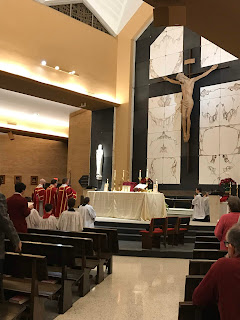 There were between 150-200 people in attendance.  South Hills Council 3084 serves nine parishes located in the municipalities and townships of Pittsburgh's South Hills. 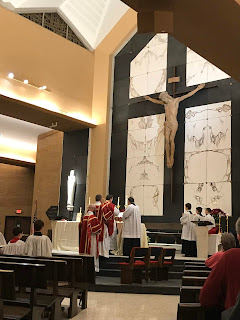 One of the primary organizers of this Mass, Salvatore Randazzo, is a member of South Hills Council 3084 and the Traditional Knights Latin Mass Network. 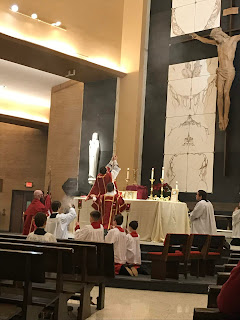 South Hills Council is planning future Latin Masses at the other parishes they serve. 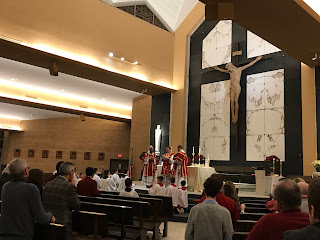 
Registration is now open for the 8th annual Sacred Liturgy Conference to be held at Gonzaga University in Spokane, WA on June 9-12, 2020. This year’s theme is “Incarnation in the Eucharist”. Highlighting the conference will be a keynote address and Pontifical Mass of Corpus Christi celebrated by Gerhard Cardinal Müller.

The Sacred Liturgy Conference is the largest liturgical conference in North America with participants attending from all over the world. Our mission is to enrich our knowledge and understanding of the liturgy. The 2020 faculty will illuminate the Incarnation as inseparable from the Cross, Resurrection, and the Holy Eucharist. Four Gregorian Masses will be celebrated in the two forms of the Roman Rite and in the ancient Dominican Rite.   For more information including schedule, full list of speakers and to register please visit:

Space is limited and an “Early Bird Special” rate is available through March 1, 2020.

As Lent approaches, we wanted to share with you a wonderful opportunity for almsgiving that will benefit your friends and family. Our friends, the Carmelites Hermits of Our Lady of Mt. Carmel in Fairfield, PA, who offer the traditional liturgy exclusively (Carmelite Rite), are offering 40 days of Traditional Masses and 40 days of prayers and sacrifices during Lent for the following intentions:

Knowing that many have family members away from the Sacraments and the Church or difficult situations in their lives, the Carmelites wanted to extend to the Traditional Knights Latin Mass Network the opportunity to enroll their families, friends, clergy, or anyone in need of the graces from these many Masses and spiritual sacrifices.

Lastly we should also mention, the Hermits superior, Fr. Thomas Mary of Jesus is also a Brother Knight.

To learn more visit this video:

Just a reminder about the St. Valentine's Day Latin Mass this Friday February 14 near Pittsburgh:

Last year, our Network unveiled a program to help councils organize a Latin Mass at their parish. We help facilitate finding a priest, and provide guidance on obtaining the necessary items & logistics, etc.
As the new year begins, we are pleased to report the first fruits of this project.


For the Feast of St. Valentine, February 14, Members of South Hills Council 3084 in Bethel Park, PA are helping to organize a Traditional Latin Mass for their parish’s patronal feast day. If you live in the Pittsburgh region, please consider making an effort to attend. Our thanks to Brother Salvadore Randazzo who took the lead on this project.  If your council’s parish lacks a Latin Mass but you would like to have a Latin Mass offered at your parish, please let us know. 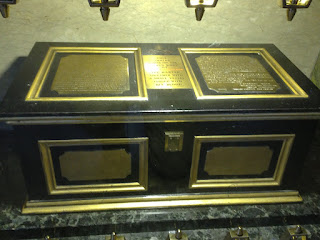 The Sarum Rite is an ancient English Rite (Mass and Divine Office) used in the 12th century.

3/7/2020 update: The Fraternity of St. Peter posted an article on the Sarum Rite and this special occasion.

Also posted in a video of the event: