What is the Extraordinary Form of the Latin Rite?

“What earlier generations held as sacred, remains sacred and great for us too, and it cannot be all of a sudden entirely forbidden or even considered harmful.” – His Holiness Pope Benedict XVI, Apostolic Letter Summorum Pontificum issued Motu Proprio (2007), Paragraph xi

Part I: Rites and Forms
Part II: What is different between the Forms?
Part III: The rediscovery of the Usus Antiquior 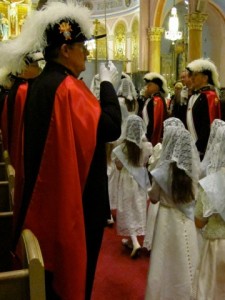 Part I: Rites and Forms

We need to explain what the Extraordinary Form of the Latin Rite is as many Knights have not experienced it. This Mass is also known as the Traditional Latin Mass– or the Tridentine Mass, since it was codified at the Council of Trent. In fact, one of the reasons to promote the Extraordinary Form is that this is the same Mass what was being used when our Order was instituted. It is indeed the Mass that shaped and formed the priesthood of our founder, Blessed Father Michael McGivney and countless Knights and priests after him.

While most of us are used to only one type of Mass, which is called the Ordinary Form of the Latin Rite, i.e. the Mass that most of us attend in the vernacular every week, there are many Rites within the Catholic Church. The Eastern Catholic Churches (of which there are 22) that are in Communion with Rome use five different Rites with some variation (Alexandrian, West Syrian, Armenian, Byzantine-Greek, and Eastern Syrian). These Rites are very similar to those used in Eastern Orthodoxy.

The Roman Catholic Church has two primary Rites, the Ordinary Form (known sometimes as the Novus Ordo, which is the Mass of Vatican II) and the Extraordinary Form (the Tridentine or Traditional Latin Mass). Some of the religious orders that pre-dated the Council of Trent (1545-1563) by two-hundred years, have Rites that are variations of the Extraordinary Form. An example of this is the Dominican Rite of the Order of Preachers.

We should also mention that concomitant with the Mass of the various Rites, there are different Calendars, Liturgy of Hours (Breviary), and Rites of the Sacraments in the non-Ordinary Form liturgies. This is also true for the Eastern Rites as well as the particular religious order rites and the Anglican Use. Thus the Liturgical tradition of the Church is very rich and we should take every opportunity to participate in its various manifestations so that we may reverently worship God.

Part II: What is different between the Forms?

If a Knight is planning on going to an Extraordinary Form (Traditional Latin) Mass for the first time or in many years, then what is different between it and the typical Ordinary Form Mass in which most of us participate on an everyday basis? This list of differences between the two forms is considerable, so we will limit it to seven, as that is a good and holy number.
Part III: The rediscovery of the Usus Antiquior
We offer a brief overview of germane Papal documents that has lead to us being able to have the Usus Antiquior celebrated more frequently than was the case even a decade ago. We will only mention two documents, and one particular item in each.

After the changes to the Roman liturgy following Vatican II, the Tridentine Mass, that had been used in one form or another in Western Catholicism for well-over 500 years was replaced. In 1984, the Congregation for Divine Worship under the direction of Blessed John Paul II issued an indult, entitled Quattuor Abhinc Annos, which provided for a line use of the older (1962) form of the Roman Missal.

This allowed for the Tridentine Mass to be said at parishes by permission of the Ordinary (Bishop) only.

Pope Benedict XVI released a Motu Proprio, an Apostolic Letter, SummorumPontificum (2007) that allows for a greater use of the Traditional Latin Mass, which he called the Extraordinary Form of the Mass. Instead of needing the permission of the Bishop for the older form of the mass, the interested faithful only need the permission of the Pastor of a church. It is the Pontiff Emeritus’ desire that these two forms of the Roman Rite be mutually enriching.

Ordinary Form of the Latin Rite(OF Mass) is also called theNovus Ordo, the Vatican II Mass or often just plain “Mass” and follows the 1969 Missale Romanum of Ven. Paul VI, and currently in its third edition (2002).