We are pleased to announce one of our most important initiatives in our Network’s ten-year existence: The commissioning of a special portrait of Blessed Michael McGivney, priest, pastor, Knights of Columbus founder and, God willing, someday, a canonized saint.

Already several beautiful portraits have already been commissioned of Blessed Michael, but this one will be unique and important to our network members and sponsoring Councils. The portrait will be the first to feature Blessed Michael offering the Traditional Latin Mass, the only Mass he knew and offered.

In order to fund this initiative, we are asking all Knights in our Network to consider participating in this historic initiative by donating at least $100 (if possible) toward the costs of the portrait.

We invite you to learn more by reviewing the attached prospectus, including a copy of the draft sketch.  There are three ways that Knights can help:

To donate, please see the prospectus link below, which includes a draft sketch, portrait details, and an address to which mailed contributions may be sent.

With the Latin Mass being threatened, is there not a better way for Knights to rally to the Mass of the Ages, by supporting a portrait of our founder who offered the Traditional Latin Mass in our country, throughout his entire priesthood?

Thank you for your consideration.

Blessed Michael, pray for us!

Brother Brian O’Connell (Our Lady of Mt. Carmel Council 13205, Littleton, CO) is facilitating
the portrait and donations, through his business. Donations are not tax deductible.

Checks can be mailed to:

Today, Wednesday October 12 is the 530th anniversary of Christopher Columbus’ discovery of the New World.

In 1892, Pope Leo XIII decreed that a votive Mass of the Holy Trinity be offered today in thanksgiving for Columbus’ discovery and bringing the Catholic faith to this hemisphere.  Commending Columbus, Pope Leo XIII wrote in his 1892 encyclical:

For Fr. Hardon, it was clear that the zealous missionary faith of both Columbus (a Third Order Franciscan) and Servant of God Queen Isabella the Catholic (declared in 1974), led them to pursue this mission.  This hunger for souls for Christ may have also been one of the reasons, Blessed Fr. Michael J. McGivney, choose the name Columbus for his new fraternal order, the Knights of Columbus.

Courage and Conviction: The True Story of Christopher Columbus

Why the Knights of Columbus?

Additionally, several Knights councils will be organizing Masses to defend Columbus and honor Pope Leo's call for thanksgiving for the bringing of Christ to the New World.
For us Knights in the United States, Canada, and Mexico, we should be grateful for Columbus' bringing the Holy Faith to these shores.  As such, we close with Pope Leo XIII:

As some in the Church today struggle with how to minister to pagan cultures, let the story of Columbus, the Franciscans who followed him, and the North American Jesuit martyrs serve as an example to all on how to reclaim the Holy Faith that was introduced to these lands five centuries ago and with zeal share it with those who are separated from it or who lack it entirely.
By Latin Mass Knights at 10/12/2022 02:36:00 AM

From our friends at the Society of St. Hugh of Cluny:
Dear Friends,
Please consider making plans to attend this event in Washington and Arlington,  to show our support for our friends in the Washington area and to protest  recent cancellations of  the Traditional Mass:
Join us on Saturday September 17, 2022 at 9 AM for the National Summorum Pontificum Pilgrimage.
We will mark the 15th anniversary of Benedict XVI’s liberation of the Traditional Latin Mass, and make a public act of sorrow/support of what we will be losing as the Diocese of Arlington and Archdiocese of Washington, D.C. impose devastating new restrictions on the celebration of the TLM.
The Arlington Diocese restrictions go into effect on September 8, while the Washington Archdiocese’s draconian implementation of the papal decree starts 13 days later on the 21st.
The pilgrimage will begin at 9 AM on Saturday, September 17 at the Cathedral of Saint Thomas More in Arlington, VA, will end when we reach St. Matthew’s Cathedral in DC, and should take about two hours.
For updates, we now have an instagram, twitter, and Facebook page (all of which can be found @tlmpilgrimage on the respective apps), and we now have a website being tlmpilgrimage.com.
Please share, as we want this to be as large as possible for such an occasion. 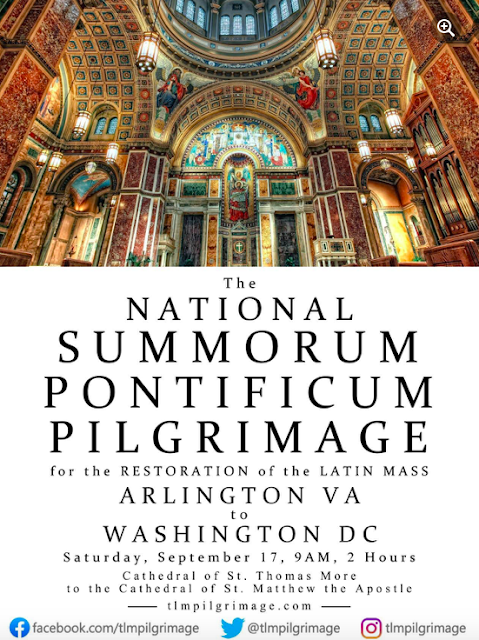 Votive Mass for Defense of the Church this Friday August 26

With a widespread communist persecution breaking out against the Church in Nicaragua (and elsewhere), we wanted to encourage Knights, Councils and others in our network to consider asking their priests to offer a votive “Mass for the Defense of the Church” this Friday August 26.

Since this Friday August 26 is a Feria day, a votive Mass (1962) can be offered for just these important situations and intentions.  The vestments are traditionally purple/violet and the Mass would not displace the actual intention scheduled at the parish for that Mass.

As many know, the Knights have long championed the Church’s liberty and were key in helping to support the Mexican Catholics during Calles’ persecution in the 1920s – one that gave many martyrs including six Knights:

If your priest is able to offer this votive Traditional Latin Mass (found in the 1962 Missal), the laity propers can be found at this parish’s website: http://www.saintrosequincy.org/propers/votive-mass-defense.pdf

Blessed Michael McGivney and the Mexican martyrs, pray for us!