ACTION ITEM! - 15 August 2021 – Worldwide Consecration to the Immaculate Heart of Mary by all TLM Communities

As endorsed by Rorate Caeli, Fr. Z, and many other Catholic blogs and pages, you are urged to get your Traditional Latin Mass community to join this global effort. This is very important! We can only win this spiritual battle through prayer & sacrifice, and through the intercession of our Immaculate Mother.
The Holy Catholic Church is in an unprecedented worldwide crisis. The only hope for the Faithful is a Divine intervention, through the intercession of the Immaculate Heart of Mary.
Two priests who wish to remain anonymous - one a Diocesan, the other a Religious, both of whom offer exclusively the Traditional Mass - propose a worldwide consecration to the Immaculate Heart by all TLM communities on 15 August, 2021, the feast of Our Lady’s Assumption. They hope that many Cardinals and Bishops will also associate
themselves with this entrustment.
May the Immaculate Heart of Mary triumph and reign! 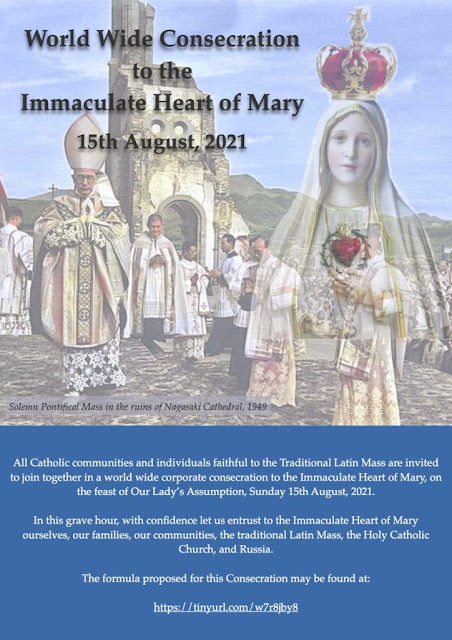 As many of you know, the Holy See has released a new Motu Proprio Traditionis Custodes (July 16, 2021) which attempts to place new restrictions on the Traditional Latin Mass. The document is unusual (to say the least), in that it was issued with no advance notice, with an immediate implementation and with some problematic regulations that are hard for bishops to decipher.

Curiously though since the publication of Traditionis Custodes, many more people are coming to the Traditional Latin Mass. Moreover, Cardinals are defending it, bishops supporting it, and more priests are now interested in learning it. An important aspect of Traditionis Custodes is the fact that it has no text claiming to abrogate the Mass of Ages.

The simple fact remains that the Traditional Latin Mass is the future of the Latin Church, as it perfectly contains not just the sacredness of the liturgy, Gregorian chant, and the language of Latin, but also the traditions, theology, customs, and culture of the perennial Church. Christ loves the Traditional Latin Mass so much that he allowed it to nourish his flock for 1,600 years and counting (2,000 years if one counts the apostolic origins of the Canon). It truly is the Mass of Ages.

What are Knights to do? Response may vary depending on the local situation; however, we already have many of the resources necessary for the full restoration of the Traditional Latin Mass at our disposal. We can suggest but a few options:

As we approach the 450th anniversary of the Battle of Lepanto this October, let us seek refuge in Our Lady of the Rosary, who can take the most seemingly hopeless moments and quickly turn them greatest victory for Her son. Let us also pray for Pope Francis’ conversion, and that he will consecrate Russia to the Immaculate Heart, so that the Triumph of the Immaculate Heart will arrive as soon as possible.

Our Lady of the Rosary, pray for us!